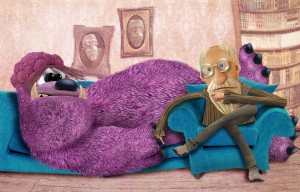 It has been a great pleasure for us to take the interview with Juan Carlos Federico, Argentine graphic designer and illustrator. He was a professor of Graphic Design at Buenos Aires University between 1992 and 1998. In 1992 he founded Signum Design Studio. He has also received several awards for corporate image design, editorial design and poster design; amongst them, the first prize for the Buenos Aires Institutional Image Design Competition.

Since the 1990’s he has been working for various Argentine and international companies, developing integrated corporate image programmes. Since 2008 he has also been illustrating for advertising campaigns, books and magazines.

AP: When did you first discover your passion for art?

JCF: As a child, I loved imagining things and making little gadgets. I used to spend long afternoons next door in the carpentry workshop of an abandoned house which had belonged to my grandfather, making trinkets out of wood and old tins. Some of them were just scarecrows and such like, but others would have a specific function such as leading a marble along some pipes. I guess that this must be the inspiration behind my creatures that are made from a mixture of parts from other objects. 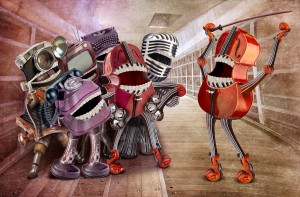 AP: Did you always think you were creative or is it something that you discovered later on in life?

JCF: I had always dreamt of being creative but never imagined I would actually apply it in the field of visual communication. I used to think of creativity in terms of hard science; I studied Physics at Buenos Aires University and at the same time I started studying Graphic Design as an easy way to get a job to help fund my scientific studies.

As time went by, however, I began to sway more towards design and illustration, which is now my passion. I think that in life anyone can be creative somehow. It’s just a question of our attitude when faced with a pre-established reality. 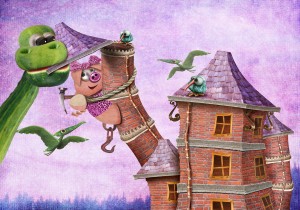 AP: What inspires you on a daily basis?

JCF: Discovering something new is always an adventure for me. Most of the time I find myself recycling old solutions for new problems. But every day and every new project represents a new and unique opportunity for me say “Eureka”.

AP: What genre are your works? Please, tell our readers about the genres you tried yourself. Were there any difficulties?

JCF: I find it difficult to label the genre of my art. As a student, as a teacher and as a researcher I’ve spent a lot of time trying to define the great masters in terms of genre. Perhaps in order to understand another’s work we have analyse it and label it.

As for me, I find it difficult to place myself in a specific genre, as my work is constantly changing. For instance, one of my illustrations, which I did as part of a marketing campaign, I’m now transforming into a sculpture. I’ve also been working for a year now on several animations of a series of digital sculptures, which were originally meant to be static images.

Currently I’m only concerned with creating and producing art, without conditions or speculations. If, one day, any of my works become famous, I’ll leave it to others to label it.

AP: What kind of equipment and techniques do you use?

JCF: I don’t know how to draw, I don’t make sketches; but each weakness makes you develop a different strength to compensate for it. Just as a blind person optimizes the other senses, I’ve learned to be creative by using parts of photographs and different textures to express myself artistically. 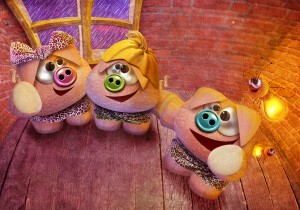 This is the way I work: I write brief descriptions of my ideas, always in text format rather than drawings. Then I go out and look for the different parts to create my Franskenstein.

The process I go through to reach the final piece is more like a sculptor´s than an illustrator’s. In Photoshop, I start off with a scruffy pile of objects and textures and I just let their shapes guide me. The shapes know what they are doing.

AP: Do you have any achievements to tell us about?

JCF: It’s been a long time now since I became a graphic designer, I’ve won several awards and I’ve developed many corporate identity projects. When it comes to the illustration field, everything is new to me and each project is a fresh achievement. Currently, I’m working on book illustrations and advertising campaigns for companies in the U.S., Mexico, Canada, South Africa, Spain, Chile and Argentina, all at the same time. I’ve never worked with so many projects simultaneously before and I’m starting to feel satisfied with some of the results. I feel that this is my biggest achievement, even though it’s not as glamorous as some of the awards I´ve won.

AP: What is your professional goal? What do you do to reach it? 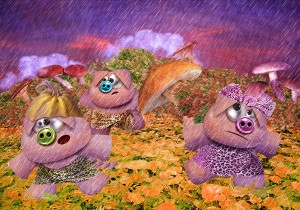 JCF: I do not plan a final objective, I enjoy everyday challenges. Sometimes I let the winds of fortune guide me and other times I choose to fight against the current. Many times I’ve sailed to different horizons, but as soon as I see land I start dreaming of the next frontier.

I think that life is more about the search than finding the objective. Whilst finding an answer is rewarding, it’s the path I take to get there that really keeps me alive.

AP: Is there anyone who gives you support you in your creativity?

JCF: My wife and kids. I spend some time in my studio with Joaquin, my eldest son; he likes giving his opinion on everything I do and he participates in many different ways. The time we spend together is priceless.

AP: What’s the golden tip that you can give to our readers?

JCF: I’ll quote Shigeo Fukuda, one of the best poster designers of the twentieth century, who said during a conference at the University of Buenos Aires “if I don’t like the poster I have designed I’ll re-do it a hundred times, until I get a good result”. Greatness is usually reached through perseverance and humbleness.

AP: Would you like to wish something to AstrumPeople?

JCF: I’d like to quote again: “Inspiration exists, but it has to find you working!” Pablo Picasso.

Trent Grooms Paintings: Abstract With A Twist Of Indoor Graffiti