AP: Tell us few words about yourself. 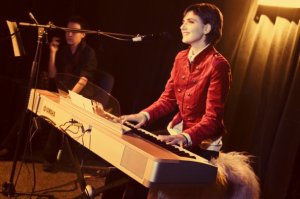 AA: I decided to be born in my mom’s and dad’s family in the USSR in 1986, in 450 km away from Moscow. When I was 3, I was slipped into my hands a rubber doll instead of my favorite milk-truck toy and then a school notebook. And only 15 years later I was given the opportunity to choose my own track. I chose a theatrical school and after 6 years I graduated from St. Petersburg University of Railway Transport (Russia). These are the tricks. I remained to live in St. Petersburg. I earn a living by working according to my specialty. But I live with music, my beloved man and funny dog.

AP: Your first works. What did they look like?

AA: My mother says I sang everything that I heard, for example: “The sun is shining, the river is glittering ” 🙂 I think that’s how it all began. When I was 7 years I asked my mother to buy me a piano. She did. And I learned to play the piano. Once, at a chorus lesson in the second grade, we were all asked to sing a verse on the assessment, and I after I did, the teacher said: “This girl can become a singer.” After that, I stopped visiting the choir. So I started to sing in childhood, but to write songs much later. Once I uttered the phrase “I’ll never write my own song” and after that I was “broke through” and I started writing my own songs.  It’s a kind of magic. But the inspiration is not a continuous function. It is discrete quantity. The most powerful source of its appearance is the border states (the life and death, in particular, for example, the choice between something). 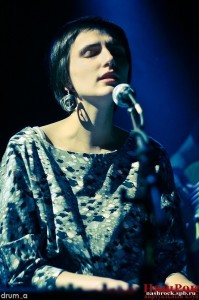 AP: Do you have any formal education in your sphere or were you self-taught?

AA: After 9th grade I wanted to enter a music college, but at the last minute I scared to do that. So after finishing the piano music school I had to take private lessons of vocal. I’d love to get at least a secondary education, but if there were an opportunity…hey, the opportunity, where are you ?! 🙂

AP: What genre are your works?

AA: I did not try to sing anything else, in the most general sense, except singing the pop songs. I would be interested to write instrumental music. Yes, it would be really great, but I have not ripened yet for that. Speaking of style, a song can be arranged in hundred ways, but in real life, few musicians want (even fewer can) to work within a team in a mixed style.

AP: How would you describe your works?

AA: You can call me an ordinary woman and I would not be offended. But if someone were to say that my songs are not original I’d be really angry. I’m not even going to explain why they are unique. It’s like talking about children. Well, of course you are not going to show off and argue that your kids are much more ingenious than neighborhood’s ones. In the same way your children have two hands, two legs, but they are yours, and my children are mine. So my songs are the most painful sufferings and the greatest joy for me. And if someone else likes them – I am proud.

AP: What kind of equipment and techniques do you use to create them?

AA: I use my vocal cords and also Clavia Nord Stage.

AP: Would you consider yourself as an expert in this sphere?

AA: Of course I wouldn’t. Professional – a person who makes money with his craft. Of course, I only want to be involved in music. For this you have to work, work and again work on songs, arrangements, vocal technique, and you need more self-confidence, creative boldness, a little bit of madness and a little luck. 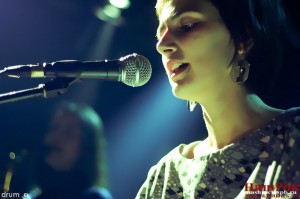 AP: What is your success formula?

AA: Belief in yourself. I think people who believe in themselves, automatically infect others, adjusts them to their own wave. Sometimes I lack of it, but I work in the right direction.

AP: Is there someone who helps you in your creativity?

AA: My best friend is Svetlana Ivanova. She takes the role of Director of our team. She is an angel in the flesh:) Anyway, I am indebted to her. My beloved is very worried about my creativity. He actually the first who gets the wave of my emotions, if something does not work. Of course, the people that are all tied are musicians of Alisa Al’es. Sometimes I love them very much. Sometimes I want to kill them. Together we have come up with song arrangements; if someone slows down the whole process slows. Everyone is different, but is good.