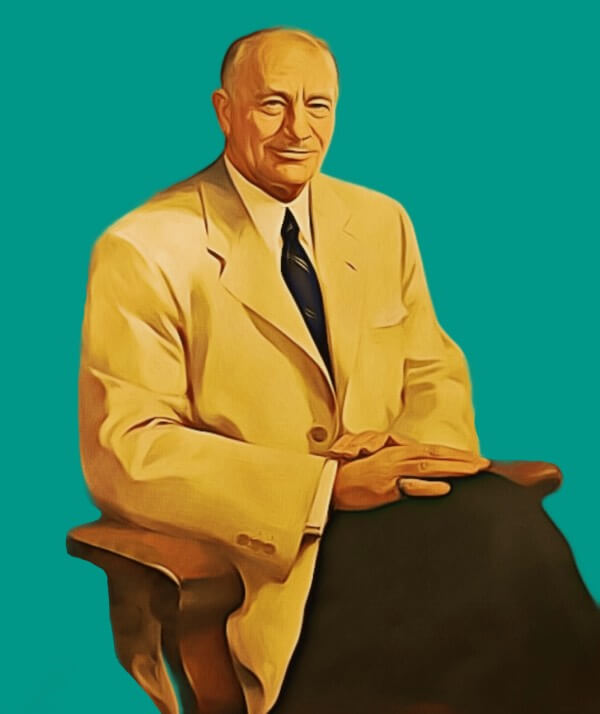 In this article we will tell you a story about Conrad Hilton biography and the success story of his business. It was the man who changed a usual view on running hotel business and only in the United States, but also almost in every country around globe. Enjoy reading the story about innovations, trials, failures and success.

Conrad Nicholson Hilton (December 25, 1887 – January 3, 1979) was an American hotelier who founded the Hilton Hotels chain. Conrad Hilton was one of the first persons who introduced into this business 1-5 star hotel rating system. In addition, he managed to combine hotels with restaurants and casinos. The story of how the legend was born hospitality. This is a story about how the hospitality business was born.

Conrad Hilton was born on December 25, 1887. He was the eighth child in the family. His father, August Hilton, ran a small business – a grocery store. We can not say that the store were bringing a lot of money, but the family did not starve and Conrad successfully received a higher education in the Mining Institute. He was an engineer by profession, but it did not attract him much. Since childhood Conrad Hilton wanted to become a bank manager. He saw himself among the people who were tossing millions of dollars. But the war came.

In 1917, Conrad went as a volunteer in the army. Eighteen months later, he returned back home and found out that his father had died in a car accident. Conrad had to take care of his future on his own. However, it was not so easy to start the business, which he was dreaming about. Conrad Hilton suffered one failure after another. When he was 31, his first bank went bankrupt, which lasted less than a year. The young man had a purse of 5000 dollars at that time and a head filled with dreams of banking. But Hilton was not destined to run a banking business.

Who did Conrad Hilton leave his money to?

What is Conrad Hilton known for?

Conrad Hilton was known for his unwavering optimism, honesty, and sense of fairness. During his time as a hotelier, his hotels grew to be the largest and most profitable in the world. During the 1919 oil boom, he bought his first hotel in Cisco, Texas, after learning that room occupancy changed three times a day.

Is the Hilton family still rich?

The Hilton fortune is massive—around $4.5 billion, according to Reuters.

Having arrived in Cisco (TX), 31-year-old Hilton stayed at nondescript Mobley Hotel. Young entrepreneur immediately noticed queue that lined up, hoping to get a room. But there were no available rooms and the owner was so tired of the work and did not even plan to expand. Customer had to go looking for a place to sleep in the other hotels. The owner just wanted to retire. It was one of those situations when a person is at the right time and in the right place (the same thing happened with Ray Kroc, when he entered to the McDonald brothers’ restaurant).

Having bought Mobley, Conrad began to improve the hotel. For a start he equipped the hotel with a large number of rooms thereby eliminating future queues. Then he came up with idea that he could earn more on guests by offering them some additional services and products that would entertain them (at that time most of the hotels were like boring coaching inns). Thus Conrad decided to place small shop windows in the lobby around the columns which featured a variety of daily consumption items (newspapers, magazines, razors, toothbrushes and toothpastes). Conrad later remarked that one shop window brought him $8,000 dollars a month.

Conrad Hilton’s family was very surprised of his success, who had already considered him a loser after all his failures in the banking business. However, a year later after the purchase of Mobley Hotel, Conrad purchased his second hotel in Fort North and then some more. In 1924, Conrad Hilton became the owner of 350 guest rooms. He went up to the time when finances allowed to build his own hotel. And after a year, in 1925, there was a stunning opening (at the time) of Dallas Hilton Hotel, that had 300 rooms.

A year later the 38-year-old entrepreneur finally got married to Mary Adelaide Barron. They married in 1925 and after nine years of living together they divorced in 1934.

It was a good time given that the Dallas Hilton was the first hotel, which bore the name of the founder of the company. However there was no time to relax. Three years after there was the economic crisis. It hit hard the hotel business:  people simply started travelling less and business travels declined.

By the beginning of the 30s 80% of the United States hotel companies were ruined. Conrad Hilton was forced to sell his business. However hotel business was not the best option at those times and the owners of Hilton Hotels by the end of the Great Depression hired Conrad as a manager of hotels chain and even wanted to sell him the hotel business back.

In 1942, Conrad got married the actress Zsa Zsa Gabor. They were living together till 1946. Conrad Hilton and Zsa Zsa Gabor had a daughter, Constance Francesca Hilton who was born in 1947.

After few years, gradually Conrad Hilton regained his business. He redeemed hotels one by one. In 1949 he acquired one of the most luxurious hotels in New York – Waldorf-Astoria and opened his first hotel outside the U.S, in Puerto Rico.

In 1954, Conrad Hilton shocked the financial world, having made the largest deal in the history of America. He purchased Statler Hotels company for $ 111,000,000 that was the main competitor to Hilton. Such acquisitions were possible for Conrad Hilton, because in 1946 his company went public, thereby obtaining additional capital injections from outside investors.

It is worth mentioning that there were already two companies in the hands of Conrad by that time: Hilton Hotels that was targeted to the United States and Hilton International – dedicated to the international business development. Hilton Hotels started to attract more and more guests. Company’s success they explained simply: rich people such as businessmen, royal personages or show business stars required unobtrusive comfort as ordinary members of the middle class. This was a major luxury. It was the fact which began to attract as well as millionaires, movie stars and ordinary middle class. They all liked staying at Hilton Hotels.

But one thing is to talk about unobtrusive comfort and quite another thing is to provide it. What was done to it? First, nobody before had placed small shop windows in the hotel’s lobbies like it was done in Hilton Hotels. Second, nobody before had equipped its rooms with air conditioning, entrance doors with automatic control, alarm clocks and telephones that included such feature, as a direct dialing (no need to call the reception and ask to be connected with a certain telephone number). Third, Hilton Hotels were built close to airports and seaports, thereby offering travelers special packages (round-off). Forth, there was a special reward system for guests called Hilton Honors.

In 1966, Conrad Hilton departs from works by passing control of the hotels chain to his son – Barron Hilton. At that time, the famous hotelier (that’s how he liked to call himself, after hearing a French word – ‘hôtelier’) wrote his autobiography “Be My Guest”. Mary Frances Kelly was another wife of hotelier. They got married in 1976. Then he founded the Hilton Foundation charity and bequeathed all his property to it after his death in 1979, in Dallas, where he built his first Hilton Hotel. But the story does not end there.

Barron Hilton managed to win back the right to the inheritance from his father charity. It took about 9 years to do that (Conrad had 8 children and 100 grandchildren). It should be said that his son managed quite well hotel business and made several key changes to the Hilton Hotels corporation. First, the company moved to a franchise model. The truth is this model was introduced by Conrad himself, but to bring it to the work was done by the son. Second, in 1973, the company implemented a remote reference system, called Hiltron. The client had dial a hot line number, and he was getting all the interesting information from the talking robot, including the availability of the hotel rooms. In 1999, the system was replaced with a more powerful – Hilstar, which took into account capabilities of global Internet. In general when it comes about information technology, the Hilton Hotel network introduces them much faster than its competitors.

Besides, it is worth noting one more fact in the history of the Hilton Hotels: merging hotels and casinos. The first casino hotel appeared in the late 60’s, under the guidance of Conrad Hilton in Las Vegas. It was one of the most controversial steps in the history of the company. But it showed its worth in 1987 when Ladbroke Group acquired Hilton International, whose main business was gambling.

In the XXI century, there were circumstances that the hotel business brought them nothing but losses. But gambling business, managed not only to be profitable, but also to cover the losses of the hotel company.

In 2007, an investment group Blackstone, led by Stephen Schwarzman, bought out the entire Hilton family hotel business for $ 26 billion dollars. And went to pay off debts of the company that reached $ 7.5 billion.

P.S. The book, “Be My Guest,” written by Conrad Hilton, is still kind of Bible for all hotels.