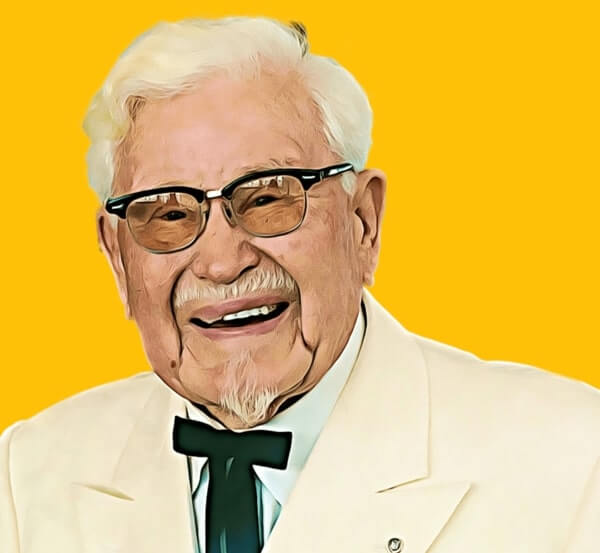 In this success story, we are going to share Colonel Harland Sanders biography and history of KFC, an American restaurant chain that he founded. Enjoy reading a life story about entrepreneurship, delicious food, trials and failures, and brilliant success.

Harland David Sanders was born on September 09, 1890 on a country road three miles (4.8 km) east of Henryville, Indiana. It must be said that Sanders’ childhood was tough. First, he was not the only child in the family, who was not very rich. He was the oldest of three children born to Wilbur David and Margaret Ann Sanders.

His father worked part-time, doing some errands of farmers in Henryville. Mother did not work, as she had to take care of the children.

The problems began when the father of Harland Sanders suddenly died. In 1895 one summer afternoon, Sanders’ father came back home with a fever and died later that day. This occurred when the future founder of KFC was only 6 years old. His life changed dramatically. First, his mother went to work at a tomato-canning factory to feed the family somehow. And Harland Sanders was required to be a babysitter and take care of younger brother and sister at home.

This fact was the key to his life. Since these factors have contributed to the development of Sanders as the chef, all the relatives began to notice that the little boy was a real talent in this case.

When his mother remarried, he escaped from home because his stepfather beat him. Sanders falsified his birth date and volunteered for the U.S. Army at the age of 15 years. He served a full term and ended his service in Cuba. During his early years, Sanders had to work as a steamboat pilot, insurance agent, farmer, etc. Finally, he found a good regular job as a fireman in the U.S. railway company.

Life is Getting Better

In 1908, having a stable income, Harland Sanders married Josephine King. He had three children, a son, Harland, Jr., who died at an early age, and two daughters, Mildred Sanders Ruggles and Margaret Sanders. After a while, he was fired for insubordination. His wife Josephine left him taken the children back to her parents’ home. Her brother later wrote Harland a letter where he said: “She had no business marrying a no-good fellow like you who can’t hold a job.” Over the years he tried a lot of other jobs but did not find any, which he could work at for a long time.

At 40 years Harland had to change dozens of occupations. One time Harland Sanders was trying to obtain an education enrolling in law courses, but for an unknown reason, he did not finish them.

However, when Harland was already in his 40s, he had little capital accumulated over the years. For a long time, Sanders was in despair. Most of his life already passed, but he still was a man, who made no difference, did not have enough money to live in pleasure and wealth. He was disappointed in life. And, of course, he wanted to change it.

Harland Sanders bought a service station, motel, and cafe at Corbin, a town in Kentucky about 25 miles from the Tennessee border. It must be noted that Harland seriously thought about the location of his service station, selecting the best place for it. Along this road, people traveled to Florida, and other locations from northern states, and the flow of customers was endless.

Soon, Colonel Sanders began serving meals to his clients in the living quarters because he did not have a restaurant. He was cooking chicken dishes and other meals such as country ham and steaks in the kitchen. Soon his service station became famous throughout Kentucky. It was called “Kentucky Fried Chicken of Harland Sanders.” All customers noted the quality of its seasoning, which he prepared from 11 different spices. Life began to improve.

In order to increase his income, Harland bought a pressure cooker. It was a time when this type of pans just appeared on the market. He was one of the first chefs assessed the advantages of pressure cookers. Usually, it took about 30 minutes to prepare chicken, but now it’s time has been reduced to 9 minutes. That meant that customers did not have to wait so long for a meal, and it increased the number of orders.

A significant event in the life of Sanders happened in 1935, when the governor of Kentucky, Ruby Laffoon, awarded Harland the title of Kentucky Colonel for services to the state. And indeed, they were great: in fact, people all over the county were talking about the “national dish” of the state from Colonel Harland Sanders.

In 1947, Harland and Josephine divorced. And in 1949, Sanders finally married his secretary Claudia Ledington. In 1949, Sanders was honored once again with the title of Kentucky colonel, this time by Lieutenant Governor Lawrence Weatherby.

Being a Colonel, Harland Sanders developed his appearance, starting to wear a white suit and black bow tie. And nowadays Harland Sanders is portrayed on the logos of KFC. This image quickly entered the hearts of ordinary Americans, who loved a small restaurant of Sanders. He had so many clients and net worth as he had never had before. He felt success.

Of course, from time to time, there were minor technical difficulties and problems with suppliers. Once even the building of motel burned down. It was built up again quickly and resumed its job within a few months after the accident. In addition, the state government tried to help Harland because his fried chicken was a showplace in Kentucky.

But life dealt a blow to Sanders. In 1956, there was completed the construction of Interstate 75, bypassing Corbin. Sanders’ restaurant was out of sight from passing by travelers. The number of customers decreased dramatically. The once-successful business rolled down. He was forced to sell the property for $75,000 to pay his debts. He was almost broke when he was 66 years old, living off a monthly Social Security check of $105 and some savings. After a while, Sanders decided to move to Shelbyville, Kentucky.

Upon reflection, he came to the conclusion that he can sell his recipe to other restaurants. With nothing to lose, Sanders took his spices and pressure cooker and traveled throughout the U.S. in his 1946 Ford.

He started visiting other restaurants in America. When meeting a potential franchisee, he talked about the recipe of cooking chicken and its seasoning. It took a long time before he could find the first customer. Under the contract, Sanders received just 5 cents for each of his sold chicken. Not bad, considering that the volume of orders grew steadily. Needless to say that in the early ’60s, Colonel Sanders had a few hundred franchisees across the U.S. restaurants.

And after 4 years Kentucky Fried Chicken was at the peak of glory, and the old Colonel decided to sell the corporation to a private investor John Y. Brown, Jr. Under the deal, he received $ 2 million in cash and remained the official face of the company for which he was paid about 250,000 dollars a year. Colonel Sanders net worth estimated at $3.5 million. He just had to meet with the media, customers, employees, in general, to lead marketing.

In 1980, at the age of 90 years, Harland Sanders died. In recent years he was traveling, playing golf and running their own restaurant Claudia Sanders’ Dinner House with his wife. He got disappointed at KFC because he thought that in the pursuit of the lowest price and speed – the owners went to a compromise on the quality of chickens. However, after the death of Colonel, the story was not over.

In 1986, it was acquired, by the famous Pepsi Co. In 2002 the KFC was acquired by Yum! Brands. In addition to KFC, the company owns Pizza Hut and Taco Bell restaurants. David C. Novak is the current Chairman and CEO of Yum! Brands.

The chain of more than 39 000 restaurants operates in more than 50 countries around the world. Yum! Brands prefer to use the strategy of co-branding. There are many varieties of foods such as fried chicken, chicken burgers (chicken sandwiches, US), wraps, French fries, soft drinks, salads, desserts, breakfast, etc.