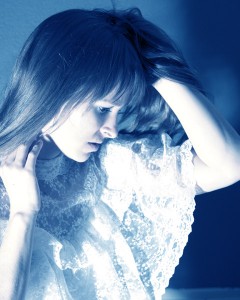 Christy Lee Rogers (Hawaii-born) is a self-taught photographer who indulges in her obsession of water as a medium for breaking the conventions of contemporary photography.  Resembling Baroque paintings and mastering the chiaroscuro qualities of light, her subjects bend and distort; bathing in darkness, isolated by light, and brought to life by ones own imagination. With light refraction as the technical foundation for her work, Rogers utilizes this phenomenon of light as it passes from the air, which has a lower optical density, into water, with a higher optical density, to capture in-camera images, without post-production manipulation.

Born in Honolulu, and raised in a family of musicians in the small beach town of Kailua, Hawaii, on Oahu’s windward coast, Rogers is also a filmmaker and musical lyricist for alternative rock band “Forty Point.”

We were pleased to meet and take an interview with Christy Lee Rogers. Enjoy reading and share it with your friends. Thank you for staying with AstrumPeople.

CLR: My first photos were snap shots of assembled found objects and high school friends taken with an old film camera that my high school boyfriend gave to me.  He was a photographer and had a darkroom in his bathroom.  I was his muse at the time, posing for hundred of shots.  Later on I began taking self-portraits and would lose myself in the performance of each shoot.

I think this all started with my profound love for drama.  I was born into a family of musicians and as a child we would get together with our large extended family at the beach, and somehow we always had a talent show, where everyone would get up on stage and share something special.  Well, I became well-known in my family for directing these elaborate stage plays, enlisting all of my cousins as actors and singers.

Then as a young teenager, I was captivated with expressing myself through poetry, and this interest in communicating ideas that seemed incommunicable became a great passion.  It actually tugged at me throughout my life and still does.

AP: Do you have any formal education in photography or were you self-taught? 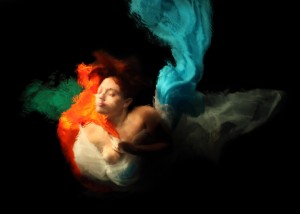 If the World Earth Could Speak

CLR: I have no formal training in photography, although I do have a Bachelor of Arts degree in telecommunications and film. Within that program I studied the business aspects of filmmaking, whereas photography and the creative aspects of filmmaking came naturally on an experimental basis. Creatively, I feel that if an artist has something important to communicate then he or she does whatever’s necessary to make that communication known; including learning new skills. I learned everything I know about the technical aspects of photography by asking questions, trial and error.  To this day I love breaking all of the hard-bound rules to capture an image that’s out of this world.  I think what’s helped me the most is that I love to learn new things and I ask a heck of a lot of questions.

AP: What genre are your photos?

CLR: I adore drama but the funny thing is that I don’t think of my works as being genre specific, and that’s what I love about them.  They express my inner feelings in a way that I have never been able to express them before, and magically that form of communication is understood and reciprocated by others.  It’s an experience that surpasses a conversation in words by light years.  Many people have said that my work is reminiscent of Baroque and Renaissance art; and now that I’ve done more art history research on both, in my heart I feel they may have been on to something.   I place a large importance on movement, drama, individual figures, light and shadow, and the sense of something greater than oneself.  So if I were to choose a genre it would be that. 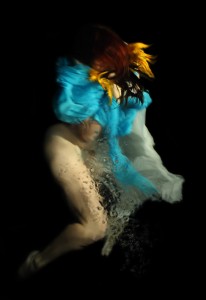 AP: How did you come up with idea to take underwater pictures?

CLR: I grew up on an island in the middle of the Pacific Ocean. There the water consumed much of my life, just as it now dominates the foundation of my art.  The beauty and tranquility of water led to my first experimentations with it as an artistic source.  Metaphorically, water stood for purity; and a body immersed in it, free from of gravity but trapped by the inability to breathe, was a huge dichotomy that consumed me.  Pain and suffering all mixed up with freedom and purity.  I would often asked myself how the world could have been created that way.  But my first ideas were to bring more hope back into that dichotomy.  And the water provided another world to create in; away from so-called reality, where bodies would bend, shapes would appear and disappear and colors would cry out to me.

AP: The newest collection of your photos is called ‘ODYSSEY’. Why did you choose this name? Does it mean something special to you?

CLR: Yes, ‘ODYSSEY’ has a very special meaning to me.  My story of Odyssey exists in clumps of ideas and energy, griping emotions and the simplicity of truth beyond words.  Like Homer’s epic ‘Odyssey’ life is an exciting and tumultuous adventure filled with thrilling characters to meet along the way.  But metaphorically, Odyssey is a much bigger story than that, where the attributes and abilities of mankind soar to an unseen, indescribable level.  In the mythological story of the Siren, the enchanting beauty and song of the Siren would cause men to throw themselves overboard to their death.  What an incredible way to express a beauty so GREAT that one would be willing to die for it.  In common terms there would be no other way to describe that feeling; and in my own way, you are seeing in Odyssey the extreme emotion of an idea that is just as simple.”

AP: What kind of equipment and techniques do you use to create your photos?

CLR:  I mostly use a Canon 5D Mark II or the 1DS Mark III.  And an Apple computer… of course. The effects in my images are created naturally in-camera using the refraction of light and movement in different depths of water.  Light has a lower optical density in the air, while light traveling in water has a higher optical density, causing a bending of light and the captured image while bodies are immersed in water. 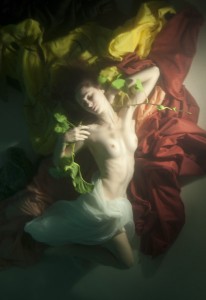 Drowning In Her Sea

CLR: I consider myself expert only in the type of photography that I’m passionate about creating.  Technically, there’s much more to learn, although I’m really only interested in the technical aspects if they help me to express myself creatively.

CLR: Believe in yourself and your ideas.  Keep yourself inspired, which means get rid of all the nonsense and negative people in your life.  And know that what you have to say with your art is important enough to continue, although the barriers may seem great at times.   I love to exhibit my work and interact with the public, and I believe that this is one of the keys to being a successful artist.  I also work seven days a week, sometimes till 4am in the morning.  My art work is my life and I just wish I had more time to physically manufacture and bring to life all of my ideas.  Never burn any bridges and always keep yourself in high spirits.  I have a huge binder full of my goals, plans, projects, inspirational quotes and many other things.  I use it often.

CLR: There are so any people who inspire and support me creatively.  I could not have created my collections without them.  My family, my boyfriend and my friends have been models, assistants, press agents, art installers, frame builders, costume seamstresses, web developers, investors, pool owners, boat navigators and music composers.  Musically, as inspiration and collaboration within my works, alternative rock band Forty Point and classical musician Natalie Kawai have been a tremendous gift to me.  My art would be much less appreciated without the support from my galleries; The McLoughlin Gallery in San Francisco, Barclay’s Club in Monaco, Samuel Lynne Galleries in Dallas, Laura Rathe Fine Art in Houston, Graphite Galleries in New Orleans and Cedar Street and Fine Art Associates in Honolulu.

AP: Would you like to wish something to your readers and AstrumPeople?